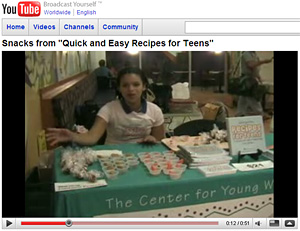 I love technology. It has helped the CYWH become what it is today. Without our website and chats we would not be able to reach and help everyone we have so far. With the new programs and websites that help people publicize their organizations, we are taking advantage of every opportunity that comes our way. Similar to our HRSA podcast, we recently had the opportunity to make some videos for YouTube. The CYWH was approached by a small group of women from Simmons College, who were introduced to us by our own Alex Schwarzer-Muth. The Simmons students were looking to make a video for class about our new cookbook, Quick & Easy Recipes for Teens, and post it one YouTube. They also wanted to include information about our Youth Advisory Program.

The Simmons students – Christina Lenis,Producer, Eleni Stefanopoulos, Writer, and Hannah Morrow, Director showed up with their gear one day in November, and started shooting. The first thing that was recorded was me and other CYWH staff members, selling and promoting our cookbook in the Children’s Hospital Boston cafeteria. I was caught off guard because I didn’t know we were recording, and I really had no script for what I was supposed to say. So they began asking me questions about what we were doing and what my favorite recipes were. I was videotaped interacting with people coming up to the table and described the different recipes that we had made as samples. This was hard because the café was really loud and I wasn’t really prepared. But I think I pulled it off. Check out the video here.

The second recording was a little more serious and professional, and I was prepared. I received an email about what I was supposed to wear, and that I was supposed to come ready to be on camera, including make-up and hair. On the day of recording I was very nervous, I was writing answers to questions that I very well knew the answers to, just because I wanted to make sure I was on point. The nutritionists Susan and Kendrin who were a big part of writing the cookbook, had a segment where they talked about their involvement with the cookbook. Then it was my turn to be interviewed about being a peer leader and I was sweating at that point. There were big hot lights in the room, but there were only two people who were recording, this made is much easier. I had to do my introduction so many times, but with Alex’s help I finally got it down. After that we just continued with the interview and I tried to be as natural as possible. They had to keep reminding me to smile big. It was a great experience and I think we are going to reach a whole new audience with our YouTube videos. Thanks Christina, Eleni, Hannah, and Alex! Make sure to watch us on YouTube so we can have lots of viewers, and make sure to leave us nice comments!