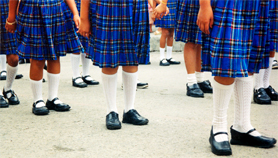 Now about this whole school uniform ordeal. A lot of people may argue that school uniforms should be eliminated because they don’t let kids express their individuality, or because they are too expensive. Well, I wore a school uniform for almost ten years of my life! From my personal experience, uniforms made everything much easier, and it also cut down on the amount of drama. When everybody is wearing the same thing, what is there to talk about? Who can you really make fun of?

Now I go to a high school that doesn’t require uniforms, and girls are too busy worrying about things like who has on “high-water” pants. The fact of the matter is, when everybody is wearing the same thing, it’s easier for us to focus on school work rather than the things that don’t really matter. Another positive aspect of having to wear school uniforms is that it can be very cost efficient. Some parents may argue otherwise, but lets face it, we are in a recession, and I would rather pay for a couple pair of khaki pants and blue shirts rather than designer jeans.

An interesting idea that some schools have are fundraisers called “dress down days” when you can pay a dollar to wear whatever you want. I know this was a huge success in my middle school. It allowed for the students to express themselves without all the extras that can come with doing so. As soon as I hit ninth grade, I couldn’t wait to be done with uniforms. Four years later, I kind of miss them. Don’t get me wrong, I love to wear my colorful graphic tees and costume jewelry, but if I could give them up for at least another year of just wearing a uniform, I would do it in a heartbeat.