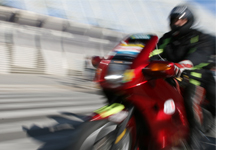 I never thought that the death of a friend was going to hurt so much. When I found out, I felt so helpless because there was nothing I could do. There was nothing ANYONE could do to bring my friend back to life. My friends and family discussed whose fault it was, but then realized that even if we found out who was guilty we were not going to get our friend back. I sat down and cried as I listened to songs that reminded me of him. I cried as I remembered all of the little things that were unique to him. I cried as I realized that this was it, that I was not going to see him again. But what hurt the most is that the last time I talked to him we argued. It also hurt that in less than a week I was going to see him in the Dominican Republic, but now when I get there he won’t be there.

Aside from all of the pain I also think that this should serve as a lesson as to why you shouldn’t ride bikes or motorcycles without a helmet. My friend suffered a tragic death. I believe that everything happens for a reason, but I find no explanation as to why he had to die this way. He was riding his motorcycle when a Jeep coming from a side street hit him. The impact was so hard that his head cracked open, his brains splattered onto the jeep, and then his body flew against a brick wall. The life of a young one was gone in a matter of seconds. His death probably happened because he wasn’t wearing a helmet. I’m not saying that if he wore a helmet he would have been alive and in good condition, but it would definitely have increased his chances of surviving the accident.

In countries in the Caribbean, motorcycle and bike use is very common because a lot of young people can’t afford cars. Therefore, they get around on motorcycles, mopeds and bikes. They can’t afford helmets for themselves and/or their passenger(s) and sometimes they simply don’t understand their importance. Perhaps they may consider themselves to be great drivers, but that doesn’t mean that someone else won’t hit them.

They said my friend was speeding, but in my heart the person driving the Jeep is guilty. Technically, the person on the main street has the right of way and the person coming from a side street needs to wait. But that does NOT mean that that’s how it is going to happen. Therefore, it’s important to protect your head from severe injuries by wearing a helmet. I can honestly tell you that losing a friend like this is truly devastating. He’s not the only person I lost in this way. My uncle passed away in the same type of accident ten years ago. He was young and about to graduate from college, but his life was taken away by a hit and run. I would hate to see more people pass away for this reason, especially if there’s a way to prevent it — or at least increase the chances of preventing it. Remember, Even if you live in a state such as New Hampshire or Illinois, or in a country such as the Dominican Republic (where the use of helmets isn’t enforced by law), it doesn’t mean you shouldn’t wear one.