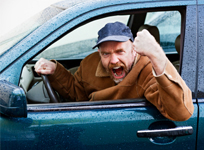 Residents of Boston have to deal with road rage on a daily basis. Drivers are always angry and feel the need to swear at people, especially around busy areas such as college campuses and hospitals.

I experienced this firsthand today while I was walking to work all the way from the Boston University campus. Granted, I was rushing because I was running a little bit late and I didn’t have much time to waste, but I waited to cross the street until I didn’t see any cars coming. As I was midway through the crosswalk, a car turned into the street I was crossing.

The driver stopped his car and started cursing at me. He looked at me like I was stupid and he began yelling about how I wasn’t obeying the traffic sign. “Look at the effin sign… it’s red and it says STOP”. I said, “You don’t have to talk to me like that”, but he responded with “I can talk to you any effin way I want.” I got irritated and made a gesture at him.

I know I should have ignored him, but I felt like it was too much. He was treating me as if I was ignorant and was swearing at me, and he had no right to. I’m not stupid or ignorant. I was simply just trying to cross the street. I was the pedestrian – pedestrians always have the right of way AND I was on a crosswalk, so he could have just dealt with it instead of causing a scene.

Although drivers with road rage can be irritating and you may want to retaliate by cursing or gesturing at them, the better option is to ignore them. Some people are just looking to engage in a conflict with someone – anyone. If you ignore them, they usually feel foolish and they have nothing to respond to. Their negative energy isn’t fueled, and the possibility for a bad interaction usually passes. Your personal safety is always more important than thinking that you can change someone else’s behavior, especially when it’s obvious that you can’t even reason with them. Arguing with people like this will just leave you feeling frustrated. Instead, try to be cool and don’t respond.