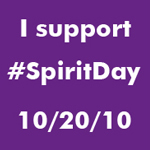 I know you must have seen some of your classmates wearing the color purple yesterday and wondered why. October 20th, 2010 was “Spirit Day”, a day to remember six young men who took their lives because they were reportedly bullied for being gay. The organization GLAAD (which stands for Gay and Lesbian Alliance Against Defamation) asked the public to wear purple in memory of the victims and to increase awareness about anti-gay bullying.

I find the idea of Spirit Day very interesting because it’s a chance to help raise awareness and prevent suicide among young people by helping them realize that they are not alone, and should not feel alone. There are people out there that understand what they are going through and can help. Spirit Day meant a lot to people that have been through or have lost someone because of bullying.

I believe that everyone in America, regardless of their sexuality, has the right and privilege to live how they want without having to worry about being harassed. I also think this campaign will help inconsiderate people realize that what they say to someone may not always be fun and games, since they may not know what the recipient of their words is going through, or if they will take what you said to heart. Just like they say, “If you don’t have anything good to say then don’t say anything at all”.