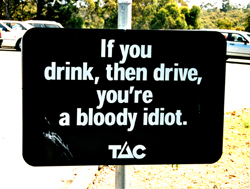 Sometimes it’s hard to understand the severity of things until they have been put into context. For example, I always hear people saying “Don’t drink and drive”. I don’t drink and drive, but I also never thought that an accident related to drunk driving would happen to someone in my family or to one of my friends. Well, a couple of days ago I was able to fully understand and relate to the dangers of drunk driving. Someone I know was driving under the influence and obviously didn’t have the capacity to think clearly. He caused a horrific accident in which the victim (the driver of the other car) died, and he is now in critical condition at a hospital. He was arrested, but it comforts me to know that he is still alive. Like my mom says, you can visit someone in jail and hope to see them again one day; but if they die you can only visit their grave, as there is no hope of them ever coming back to life.

I know that many people have the notion that bad things won’t happen to them. But, guess what? You’re not indestructible, you’re not invincible, and you’re not immortal. So, please be safe. Don’t drive drunk and don’t drive while being “tipsy” either, because it all comes down to the same thing – not being able to react quickly to things while on the road. Although I used to think I wasn’t going to be affected by drunk driving, the danger suddenly seems very real because now my friend is in a hospital bed trying to survive.