Whisky In a Can 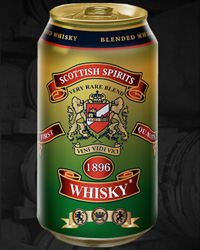 On the heels of the complete marketing fiasco known as Four Loko, Panama-based company “Scottish Spirits” is apparently looking to one-up the morally reprehensible product. For the first time ever, a company is promoting a 12 ounce can of whiskey. Yes, 12 ounces of straight whiskey. Allow me to add a little perspective to this. The average percent of alcohol in a can of beer is roughly 4.5%. Therefore, this 12 ounce can (which contains 8 shots of liquor) is equivalent to approximately 8 beers.

Is it just me, or is this potentially disastrous? The company has said that they are marketing it for three people to share in an outdoor venue, to put in a mixed drink. Sure, for some, this could be seen as advantageous. Apparently no one at these business meetings consider the cons or potential societal implications of this product. This is an aluminum can that can not be sealed. It is packaged in such a way that it has to be consumed rather quickly. Also, the can of whiskey looks just like a beer can. If you’re not paying careful attention, you might not notice the alcohol content is MUCH higher than one can of beer.

The Food and Drug Administration seems to have heeded the call with regards to the dangers of Four Loko, but what about Scottish Spirits? The company’s website states that they are planning to come out with rum, tequila, vodka, bourbon, brandy, gin and other canned liquors. I feel that whisky in a can (and the  canned liquors to follow) may become the next problematic alcoholic beverage(s) to hit the shelves. For me, the potential danger outweighs potential convenience factor. As citizens, it is our responsibility to pressure our representatives to tell the FDA that we don’t want this product on our shelves.

Tagged with: Alcohol, Canned Whisky, Four Loko, Scottish Spirits, Whisky In a Can