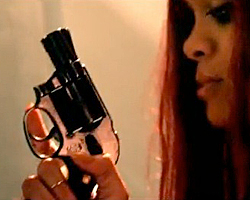 I don’t know if you guys have watched Rihanna’s new music video “Man Down” or heard about the surrounding controversy. The first time I watched the video, I didn’t get what was going on. After reading the lyrics and watching again, I understand that in the video she kills the man that sexually assaulted her the night before, and she regrets it.

I realize that Rihanna is trying to shed light on the fact that many girls are raped. Perhaps she’s trying to tell people that victims think about killing their abusers to stop them from attacking again. However, it seems to me that instead of acting as a voice of reason against domestic violence, Rihanna makes it seem like it’s okay for victims to use violence to lash out at their attackers.

Someone commented on one of the articles I read (regarding the video) and said that people are reacting to the video because Rihanna turned the tables in the sense that in music videos, females aren’t usually portrayed as violent, it’s usually men. This is true, but I think that because the (domestic violence) situation between Rihanna and Chris Brown happened so recently, every song released by either of them that has anything to do with abuse seems like retaliation. For instance, maybe she’s implying she wanted to – or should have killed Chris, or that next time around she would. I’m not saying that this went through Rihanna’s head, but it’s definitely what the video made me think.

I understand why some people are not okay with the video. Rihanna tweeted that she’s not a parent and it’s not her job to parent other people’s kids. Rather, it’s a parent’s job to make sure that their kids don’t follow in her footsteps. However, she’s contradicting herself. When the issue with Chris Brown first happened, she said that she couldn’t go back to him because she’d give young girls the impression that it’s okay to stay in an abusive relationship. So, if she was considerate of the message she gave to girls then, why isn’t she now?