Fighting Back Against “Perfect” Models 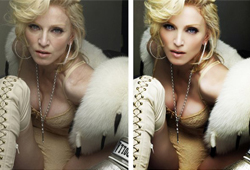 It would be almost impossible to find an advertisement or photo in a magazine that includes an image of a model or celebrity who hasn’t been Photoshopped. The media and advertising agencies will change everything from skin and hair color to the size of a models waist and legs. In 2009 Ralph Lauren even printed an ad of a model whose body was Photoshopped to make her waist smaller than her head. Photos like these give us an unhealthy standard of what our bodies should look like, and leave us with bad body image issues. Some studies have even shown a link between Photoshopped images and eating disorders and other health issues.

This week, the American Medical Association fought back against advertising agencies who Photoshop their models, saying that they send an unhealthy image to young Americans. The AMA has asked advertisers and magazines to form some sort of guidelines regarding how the pictures are being manipulated, especially in magazines for young adults. The AMA knows that these ads give young adults unrealistic expectations of what our bodies should look like.

This year members of the French parliament have suggested a law that would require attaching warning labels to all pictures that have been Photoshopped. Although America hasn’t taken this step yet, the announcement draws more attention to the issue and its impact. Remember that you can also draw attention and make a difference by writing a letter to a company or magazine editor!

Tagged with: AMA and Photoshop, Photoshopping