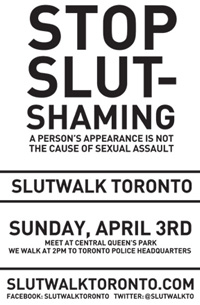 When you hear the term “Slutwalk”, what do you think of? I’ll be honest and admit that before I found out what it means, I thought it was something very negative. However, after reading about it, I realized it wasn’t. “Slutwalk” is actually an event (started in Toronto, Canada) to raise awareness and defend people of all ages who have been raped and whose credibility has been questioned because of their preference in clothing. The co-founders are a rape victim who thinks that women shouldn’t be held responsible for their rape, and someone who is tired of seeing the media de-victimize the abused.

According to the media, an officer at Yorktown University said that “girls should avoid dressing like sluts in order not to be victimized”. In my opinion, this is basically saying that if a girl dresses like a “slut”(whatever visual this is supposed to conjure up), it’s her fault if she gets raped. “Slutwalk” is trying to fight back. The participants believe that people may be raped regardless of what they wear, and that a person’s outfit shouldn’t determine their credibility. “Slutwalk” participants include those who have been raped and anyone who supports them. They’re invited to join the cause and walk together to support victims and raise awareness.

I’ve heard girls tell each other that they look like sluts when they’re getting ready to go out. I guess looking like a slut means wearing revealing clothing. However, I don’t think that wearing revealing clothing means that you’re asking to get raped. I think girls probably dress a certain way because of their personality, as well as their preference in clothing, or because it’s what they see others wearing (at a club, for example).

“Slutwalk” is right. When someone says a person got raped because they “looked like a slut” they’re trying to de-victimize the abused. Even if someone dresses “inappropriately” according to other people’s standards, rape is nonconsensual sex, and is WRONG!

Women are never at fault for being raped, and their abusers should be held completely responsible for their actions. Regardless of how women dress or how many people they sleep with, they should NEVER be forced to have sex. The same applies to people in relationships. If you don’t want to have sex with your partner or anyone else – you don’t have to. If your partner forces you have sex, that’s rape as well.