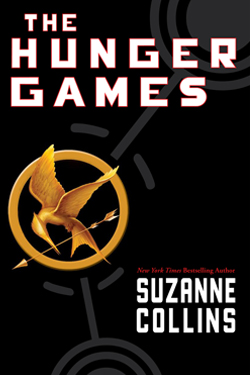 A few months ago my friends and sister were all reading this book called The Hunger Games. I had heard of the book and based on reviews it was supposed to be very interesting and compelling. At the time I was pretty busy, but I knew that at some point I wanted to read it.

The other day I was reorganizing some stuff in my room and came across the book. I was about to leave my house and go to the T, so I decided to bring it with me. As I turned to the first page I was excited to start reading and knew that this would make the twenty minute T ride a little more interesting. After reading the first ten pages I was immediately hooked, and knew I would be able to relate to the main character Katniss.

For those of you who don’t know, The Hunger Games is the first book in a three part series by Suzanne Collins. The book takes place in the country of Panem, which is where North America used to be. It’s set in the future and is a remarkable story about the ability to survive. North America has been divided into twelve districts, and each is ruled over by an oppressive government which is located at the Capitol.

The Hunger Games pit children from ages 12 to 18 against each other in a fight to the death in a giant, treacherous arena. Everything is televised and highly publicized all over the country. Whoever is picked must survive the games and is honored by their district for the victory. Will Katniss be picked to compete in the Hunger Games? You’ll have to read to find out.