Can We Just Go Back to AIM? 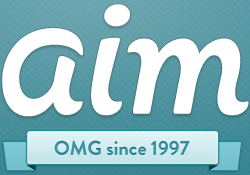 Social networking used to be so simple but oh, how things change. I remember when I had AOL Instant Messenger (AIM) and my friends and I basically chatted on a daily basis. Of course, you could always add people you didn’t really know (by finding out their username in a chat room), but you signed into those chats because you wanted to meet strangers.

Nowadays, you don’t necessarily have to want to meet strangers to encounter them. Social networking sites change often, and although it may be to keep up with the competition, I feel that in general, the changes disregard consumer interest. Some of the updates are great – such as being able to video chat on Facebook, but many of the others aren’t. Without being hyper-aware and in control of all of your personal settings on Facebook, your information is likely to be shared without you even realizing it. I mean, I think it’s okay that Facebook posts pictures you’ve uploaded on your friends newsfeeds (because technically you’ve uploaded them for others to see), but does it really have to post photos that you’ve commented on? What’s the point of that? In my opinion, it’s like helping people stalk you.

I think the whole commenting-on or “liking” a Facebook photo issue is probably one of the main reasons that Facebook affects so many relationships. I’m sure most of you have either heard about this or experienced it. Couples tend to have a lot of arguments over Facebook – and I plead guilty on this one. Arguments ensue because either one or both parties in the relationship either “like” or comment on certain photos of people they aren’t in a relationship with. I feel like even though Facebook does have privacy settings, they’re really unclear, and that the company doesn’t tell you about a lot of the changes, so you end up learning the hard way.

Obviously for most of us, the negatives aren’t outweighing the positives because so many people (including myself) are still on Facebook. Twitter is an alternative, but honestly, I think most people probably don’t know all of their followers or the people they follow. Twitter also isn’t as interactive as Facebook, which might be one of the reasons people don’t commit to Twitter alone.

I kind of wish we could go back to AIM… where we talked to who we wanted to talk to and shared pictures with the people we wanted to share them with. That way things stayed between you and the person you were chatting with – unless of course, they e-mailed a picture to someone else – but it took much more effort back in the day. So, we’ve always had to be careful about the things we post and share – I just think that now we really have to make more of an effort.