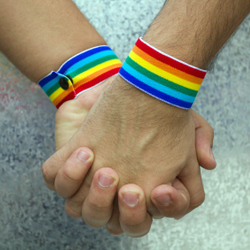 I heard it again last weekend on the street while I was enjoying the unseasonable sunshine: one teenager said to another “that’s so gay!” I thought people were moving beyond this!

We have made a lot of progress in the past few years, and most people know that sexual minority youth (i.e., gay, lesbian, bisexual, queer, and questioning teens) need social support. I’m sure many of you have seen the “It Gets Better” videos, heard about the Trevor Project, or have seen organizations form in your school or community to support sexual minority youth (such as Gay-Straight Alliances – GSAs). However, it’s important to remember that many sexual minority youth are not getting the support they need.

Many sexual minority youth experience bullying, rejection, or harassment because of their sexual orientation. These encounters can sometimes end tragically, like in the case of Tyler Clementi – the Rutgers college student who committed suicide last year. Dharun Ravi, Clementi’s former roommate, was just found guilty of intimidating Clementi and invading his privacy. For those of you who don’t remember the story, Clementi was a gay college student. Without Clementi’s permission, Ravi used a webcam and set up a “viewing party” to spy on Clementi.

This sad situation reminds us of the importance of standing up against bullying and harassment. Although some bullying and harassment can be extreme, some may be less direct. For example, how many times have you heard someone say “that’s so gay”? Usually people who say this aren’t even talking about sexual orientation, but instead talking about something they think is bad or wrong. If you’re not a sexual minority, imagine for a moment that you are. What would it feel like to hear that phrase multiple times day after day?

Lack of support, bullying, and harassment are major reasons why sexual minority youth are at risk for depression, suicide, and other bad health outcomes. Although there might be more resources out there nowadays for sexual minority youth, it’s very important that they feel supported wherever they are. You can play a big role making this happen. Build awareness by sharing the links to the It Gets Better Project and Trevor Project. Support your local GSA by attending a meeting. You can even do something as simple as questioning the language you and your peers use. The next time someone says “that’s gay”, start a conversation with them about what that means to them and others. Even challenging the words people use can make a major impact, and possibly save a life.