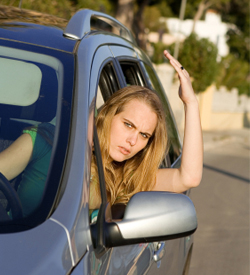 This morning, while I was getting a ride to work, we got caught in traffic. You know how they say that Boston people have the worst road rage, right? Well… we were sitting at the same light for a good ten minutes. There was so much traffic that the lights changed a couple of times before we were able to make a right turn. A little before we got to the light at the intersection, a woman driver tried to get in front of us. My friend sped up and didn’t let her through, so she rolled down her window and called him an “!#$*%^&*”. I laughed.

I understand that the driver was angry because she was probably trying to get to work on time and that’s why she was mad, but I was trying to get to work too. To her, the action may have been worthy of a nasty comment, but I think it was completely unnecessary. If my friend had let her go in front of him, we would have been stuck at the light again. I know because it happened to her.

I guess what I’m trying to say is that yes, people do have road rage and I guess if you were in their shoes you’d understand why they’re upset. At the same time, people need to try not to take traffic personally and just let it go. People need to understand that unless it’s required by law (such as in an intersection), people don’t HAVE to let them go first. They can make a nice gesture and let them go, but it’s not a must. When people realize their actions can actually ignite or minimize road rage, they might think twice about how they respond the next time they’re behind the wheel.

I’m sure that you agree that sometimes it starts and ends at name-calling, but if two angry people interact, it can definitely escalate quickly and lead to something much more. This is true with adults, but it may be even truer with teens, who would probably be more likely to get physical if tempers flare.

So, the next time you get mad because someone cut you off in traffic, just let it go. You can scream if you want to, but do it in the privacy of your car. Don’t let things get out of hand, because the truth is that yelling and name calling obviously won’t fix anything. I know this is easier said than done, because trust me… I have a limited amount of patience, and sometimes I just feel like screaming… and I do, but I try to do it on my own without involving anyone else. I just thought I’d share this with you, because I never looked at it this way before.