Can I Get A Calorie Counter with My Quarter Pounder? 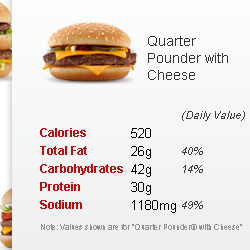 My supervisor heard that McDonald’s announced that they (and other fast food chains) must now include calorie labels on all of their menu items as part of the Affordable Care Act provision. Without telling us, she decided to conduct a mini-research study and sent me and the other youth advisors to McDonald’s to get something to eat. We each received $5.00 to get anything we wanted on the menu. We actually got paid to eat free food on the clock, but here’s the catch – we had to critique what we ordered. Based on the categories below, we had to rate the reasons why we chose what we  did, with #1 being the most important reason behind our selection.

I didn’t tell the girls that we had to rate our food beforehand as it might have biased their choices. Between the four of us, we ordered a Chicken Caesar Salad; a Crispy Chicken Snack Wrap and 6-piece Chicken McNuggets; Rolo Ice-Cream, and a Cheeseburger Happy Meal.

In general, the girls chose their food options based on:

To me, these results make sense. I talked to my boss and they made sense to her too. She went to McDonald’s and was so overwhelmed by all the information on the drive-thru menu that she just went with something she had before.

I understand that the idea behind including calories on the menu is that people might be more conscious about how many calories they’re eating in one meal. However, I think that most people will still make the same food choices. It might get people to order smaller portions (such as a small fry vs. a large or a single patty vs. a double), but it’s hard to know whether calorie labels will make a significant impact on public health. It’s a good start, but I think that so much more can be done to improve health and eating habits. McDonald’s nutrition facts aren’t going to cut it.