Being A Good Samaritan 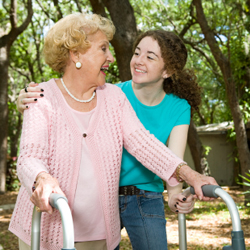 I fear the Good Samaritan may be gone. Not too long ago I was walking down a street with a friend, minding my own business like everyone else, and saw a woman rushing out into the middle of the intersection. This caught my attention, and then I realized there was an elderly blind gentleman who had lost his way crossing the street, and was now clearly in “no man’s land”. She gave him her arm (as is polite to do with blind people – rather than grabbing their arm or hand), and helped him cross. This hit me as a great act of kindness, as it rightfully is… but then I realized something else. I realized I did nothing at all. I had no idea what was happening because I was just worrying about myself – and sadly; this is the norm, especially in the culture of a city like Boston.

Today, people are more likely to be disengaged, or even suspicious towards strangers. It’s great, in a way, that everyone’s concerned with taking care of themselves, but does that make us safer? Or better people? How can you be a good citizen if they only care for yourself? I can’t answer that question, but I know that I applaud this woman’s awareness and kindness, and I’m trying to be more present in my day-to-day activities, instead of getting caught up so intensely with my own life.

One of the reasons I felt the need to share this story of her kind act, was because of a very disturbing news story from Sweden that I heard about. A man drunkenly fell onto the train tracks and was knocked unconscious, and the only onlooker decided not to help him, but to rob him. It’s stories like this that may lead you to think that the world’s gone mad, but we can’t let a few bad apples spoil the bunch.

We all have the capacity to do good, or bad… or nothing at all. I guess it’s all about what kind of person you want to be.