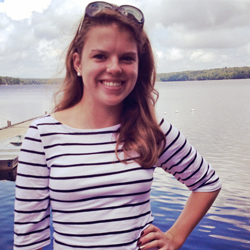 I’m familiar with being a patient. I was just two years old when I had major surgery and also found out I had only one kidney. Unusual, but it’s not the first time it’s happened to someone. I’ve always had a cataract on my left eye, and when I was maybe seven, I found out that I have scoliosis and a few extra ribs. Then in high school my period never came. My doctor said that it was late because I’m tiny and athletic, no biggie… but when I was 15 my mom decided to take me to a specialist.

I had an ultrasound test which wasn’t a new experience having grown up with one kidney that needs to be checked every now and again, but this time was different. I remember feeling claustrophobic in a tiny dark room with my mom and a technician. I recall the technician starring at her computer screen with a concerned expression on her face. She was moving the ultrasound probe on my stomach and didn’t say a word. She left the room several times, made muffled phone calls, and consulted with someone on the other side of the thick door. We asked what was going on, but she brushed it off and said that she would summarize at the end of the test. What was meant to be a 45 minute appointment turned into 2 hours. That’s when the technician walked out again, but this time she didn’t come back like she had promised. Instead another technician came in and had us move out of the tiny dark room. My mom and I had so many unanswered questions.

The next part I remember as though it happened yesterday. We were at my Nana’s house when my mom answered the phone. At first I didn’t know who it was, but after a while I figured out it was someone from the hospital. I was in the kitchen watching as my mom sat solemnly at the table, listening intently while staring at me. Then her hand went over her mouth, and she started crying. I didn’t even hear what she said to the person on the other end because I was preoccupied with the thoughts that were racing in my head. When my mom hung up the phone, she continued to stare at me. I asked her with tears in my eyes, “Am I dying?” She shook her head no. My mom then brought me into a tight embrace, and began crying hysterically as she told me that I couldn’t have kids.

There’s a reason why pregnant women and babies occasionally bring me sadness. The reason is called MRKH. You can look it up if you want, but I won’t get into the specifics now. The fact is that my insides or female organs didn’t form correctly when I was still developing in my mother’s womb, and in the long run it creates roadblocks on my way to start a family. Also, one of the side effects isn’t really something I want to share with other people. In fact, only a few people in my school know, and that’s just because I’m including my guidance counselor and the nurse (both of whom I never talk to because they never make it better).

Some of the people who’ve found out I can’t become pregnant say “That’s okay, just adopt”. Yeah, right. That’s easy for someone to say who doesn’t have to worry about it. They aren’t thinking what I am. Sure childbirth is painful, but what about the other parts of being pregnant? Having your first ultrasound, carrying a life, feeling your baby kick, listening to the heartbeat… none of that will ever be mine, and I think about it every single day.

However, there are other girls like me, as I found out at a conference for teens with MRKH and their families in Boston in 2012. The conference is sponsored by the best MRKH doctor there is, Dr. Marc Laufer. He happens to be my doctor. I’m so grateful that I live so close to Boston. At this conference I met many other girls who also have MRKH. In fact, people attended from all around the United States. One girl came from Ireland, and another came all the way from Dubai.

The opportunity to meet other young women was amazing. At the end of the day I knew I couldn’t wait another year to talk to these girls, so before the conference was over, I took the initiative to make sure that all of the girls could keep in touch. I found a blank piece of paper, set up columns for name, phone number, email and Facebook name. I passed the paper around the room so that girls could add their contact information (they could opt out if they didn’t want to participate). Next, I photocopied the information so that everyone could have a copy of the list before they left. A few days after the conference, I created a private Facebook group titled “Fighters”. I’m so happy to tell you that just the other day we gained our 70th member! My group has people from Canada, Mexico, Poland, India, Ireland, England, Nova Scotia, and all over the United States. The group is now connecting girls diagnosed with MRKH from around the globe so they never feel alone, and to me, this is a huge accomplishment.