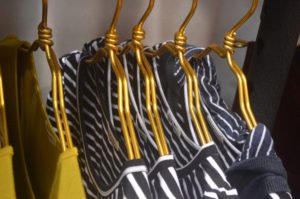 Need some extra money in your pockets? Don’t have time to get an extra job to earn some cash? Well a lot of people in my school have figured out a way to the extra money they were in need of. It all started around the beginning of the school year when a couple of my friends realized how expensive senior year was going to be. After coming to that realization, they decided to take steps to make some extra money on their own. Instead of letting unwanted clothes sit in their closet for years, they decided to sell them! By doing so, they made room in their closet for clothes they actually  do wear and they also earned extra money in the process!

My friends started off by cleaning out their closets, and setting apart any clothes that they were never planning to wear again. Then they picked the ones they thought would be acceptable to sell (no rips, stains, etc). Once they set apart enough clothes, they made an Instagram account to show off their inventory. In order to spread the word, they posted about their clothing account on other social networks like Facebook and Twitter and told their friends about the account. After gaining a good amount of “Instagram followers,” my friends took pictures of every single clothing item they were planning on selling. As a caption for the picture, they put the size, condition and price of the clothing item. Even if they put a certain price on the caption, it was made clear that the prices were negotiable which means that if the buyer does not think the price is reasonable, they could make a proposal on how much they would be willing to pay for it. If the buyer was worried about the condition and/or size of the item, my friends were willing to meet up with the buyers (only if they knew the person) in order for them to see or try it on in person. By doing so, they made sure everyone was satisfied with their purchase which means it is a win-win situation for everyone.

Not only were my friends able to sell items that they were most likely never going to lay their hands on again, but another person was also able to buy clothes that were in good condition at a reasonable price. So next time you open your closet and realize you have nothing to wear despite having a closet full of clothes, you should consider cleaning out your closet. Even if you don’t want to sell them, you can always give them away and/or donate them to a nearby organization.