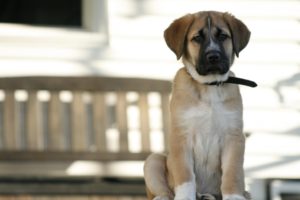 I’ll never forget the Christmas when “Kris Kringle” came into my life.  “Krissy” as I affectionately called him for short, was the cutest little puppy I had ever seen.  He was only about 4 pounds when I got him. My mom had tucked him in my stocking above the fireplace and then called me down to open presents. I didn’t notice him at first but when I did, I squealed with delight!  I had wished for a puppy for years and at first I didn’t believe that the day had arrived- I was the proud owner of a dog!

Krissy gave me unconditional love. He was around throughout grade school and most of high school. But one day he wasn’t acting himself and I knew something was wrong.  He wasn’t eating and he was having a hard time breathing. My mom and I took him to the veterinarian and we were told that Krissy had fluid in his lungs. We were instructed to give him medicine every couple of hours. The vet warned us that he was very sick and he “might not pull through.” The next 24 hours were horrible. I stayed by Krissy’s side and watched him take labored breaths while I prayed for a miracle.  When morning came, he was still gasping for air, and very weak. It was awful to see him suffering. My mom said that we needed to think about whether we should “put Krissy to sleep.” At first I had no idea what she was talking about but then I realized what she meant. We needed to talk to the veterinarian about ending his life.  At the time I kept thinking, “Why is this happening?” My mom hugged me and said that death was a part of life and that Krissy no longer had a good life.  He was struggling to breathe and it seemed so unfair that he should be in such distress. We talked to the vet who explained that he knew it was a very difficult decision and our family would need to agree that it was the best option.

After talking with my parents, we made a decision for Krissy to be euthanized, pronounced:   “youth-an- ized.” The vet explained that he would give Krissy a shot. The medicine in the shot would cause Krissy to become relaxed and slow his breathing and in less than a minute, his breathing would cease, and his heart would stop beating.  I didn’t want to watch so I went into the waiting room. My mom stayed with the vet and came out to the waiting room after it was all over. One look at her and I started crying. It seemed like I was never going to feel happy again. When we got home, my mom told me we did the right thing. It was unselfish and that Krissy would no longer be in pain. My dad told me that it was normal to feel sad but that I shouldn’t feel guilty. “Dying is part of life, and no one can take away the good memories you have of Krissy,” he said.

I remember talking to my best friend who listened to me while I told her funny stories about Krissy and she quietly said, “It will get better, I promise.”  She totally understood that Krissy was not just a pet, he was a member of our family and getting over his death would take time. For a couple of days it was difficult to think about anything else besides my beloved pet but as the days went by, I began to feel more like myself. I made a scrapbook filled with photos I had taken of Krissy from the time he was a puppy until just a few weeks before he died.  This project helped me to process my feelings and within a few days I began to feel happy again. I still think of Krissy, but I am no longer a crying mess. I know I’m not ready to get another pet quite yet but I do want to revisit the idea in the future. Even though it was heartbreaking to lose a pet, I would never trade the experience of having one.

If you have lost a pet, I’m sure you can relate to what I went through. While it’s important to grieve, I learned that it was also essential to take care of myself.  Talking to people who cared about me, made me realize that feeling sad or scared or both is a normal reaction and I wasn’t overreacting. Lastly, I can now appreciate that not everyone grieves the same way or at the same pace but if your sadness doesn’t improve within a week or so, talk to a trusted adult and your health care provider.

More information on “How to Cope with the Loss of a Pet.”

Tagged with: losing a pet, Pets