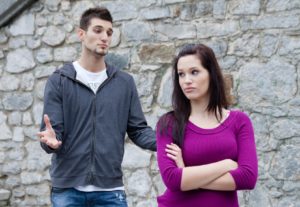 Everyone makes mistakes. However owning up to those mistakes may be more difficult for some people. It may seem easier to dismiss your behavior instead of confronting the truth and owning up to your mistakes. Avoiding reality may put a strain on your relationship with someone and it may be the cause of unnecessary stress and concern. So when is it the right time to admit that you’re wrong and what are the benefits to doing so?

Growing up, my mother and I would constantly argue with each other. During one of our arguments, I said some hurtful things which ended up offending my mother. After a couple of days, I noticed that my mom was not her usual bubbly-self and I realized that our argument had hurt her, yet I did not want to admit that I made a mistake. I thought it would be like another one of our arguments that we forgot about after a couple of days. However this one was different. My mother and I barely spoke for a couple of days, and I realized it was time to admit that I was wrong. I could not take the awkward silence in the car or during dinner anymore, so I decided to apologize. I told my mom that I realized that the things I said hurt her and that I was sorry. That was one of the first times I apologized to my mom and even though it was difficult to build up the courage to do so, it was worth it. After the first apology, I realized that it’s ok to own up to something I did wrong. Not only did my mom and I feel better after I apologized, but it also made it easier for me to understand and admit to future mistakes.

Some believe that admitting you’re wrong is a sign of weakness. Contrary to that belief, I think that owning your mistakes shows that you are strong enough to confront reality regardless of the consequences. Not acknowledging your mistakes means that you are either internally or externally blaming another person. Blaming someone who is not at fault can damage the relationship you have with that person. Therefore it’s important to apologize when you have done something wrong. By doing so, you can move on and learn from your mistake.

If you have trouble apologizing, check out our newest health guide: How to Say “I’m Sorry”.