What ever happened to Sex Ed? 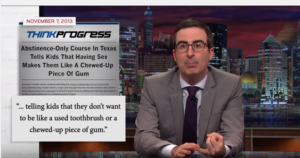 I was fortunate enough to have been raised and schooled in New York City, but I can’t recall once being taught about safe sex or how to use contraception. In my middle school, there were honors and non-honors classes. The kids in the honors classes were recommended to go to a talent class (art, chorus, or band) during their free period, while the non-honors kids had to go to a health class and possibly learn about sexual education. Even at the time, I thought this was incredibly unfair because the administration assumed that the honors kids were “smart” and either knew about safe sex or were not going to engage in sex at all. Whereas, the administration assumed that the non-honors kids were not “bright,” were mischievous, and were “most likely” going to engage in sex. Clearly, this line of thinking is wrong for so many reasons and makes me upset.

When I went to high school, I took a health class—hoping to learn more about sexual and reproductive health. I learned everything about exercising, how to maintain a healthy diet, how to make healthy smoothies, and so on and so forth. But not once did I learn about safe sex or how to use contraception. Instead, I did learn about the various STDs that exist. Like many teenagers, I did not learn or have a discussion about the birds and the bees with my parents. Frankly, for the longest time I thought sex was simply taking off your clothes because that is what they show on TV and in movies. I was also afraid of taking birth control because I thought I would never be able to have babies in the future. Clearly, my level of knowledge for sexual education was an F.

For me especially, and I am sure for some of you too, it can be really tough to learn what to expect from sex before you have it for the first time. You really don’t know much besides the awkward conversations with your parents, gossiping with your friends (who can’t possibly be as experienced as they say they are), and maybe from the little bit of sex education you had at school.

It’s crazy to think that New York City (a city that prides itself in being liberal and diverse) has a terrible sex education curriculum or lack thereof. I can only imagine what the rest of America or the world is learning and to what extent they know about safe sex and contraception. To further reinforce this concern, on Monday, August 10th, 2015, John Oliver, host of Last Week Tonight with John Oliver, talked about the complex subject of sex and the inconsistency related to sexual education in American schools. After showing abstinence-only, confusing sex education videos, he told the audience, “There is no required standard for sex ed in this country…only 22 states mandate that kids receive it, and only 13 states require that the information presented be medically accurate.” Shocking!

In a nutshell, John Oliver also explained why I may have received a different sexual education from my peers when he said, “This inconsistency of sex education creates a patchwork of knowledge, where knowledge about sexual health varies wildly—and not just from state to state but from district to district, and even from school to school.” My favorite quote from the John Oliver’s segment was when he said, “Human sexuality, unlike calculus, is something you actually need to know about for the rest of your life,” then he showed the sex educational video that he developed with his colleagues to combat this issue.

After watching this segment, I realized how important it is for schools to teach sexual education because it not only teaches biology but also life skills and responsible behaviors. Many politicians claim that sexual education is not meant to be taught in school, but something that should be taught at home. But many of us know that, not even in a million years, will we ever want to have the awkward birds and the bees talk with our parents (and try to avoid it like the plague) and we would rather discuss it with our teachers. This is why we need sex education in school, so we can have effective dialogues with a teacher and our peers in a safe space—the classroom.