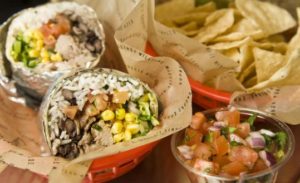 If you follow the news, you’ve likely seen headlines about foodborne illnesses, which are illnesses that people get from eating food. Most recently, there was an outbreak of norovirus, a contagious stomach bug, which started at a Chipotle in Boston.  Like other burrito lovers, hearing that the beloved fast food chain was to blame for this was upsetting! Luckily the Boston Chipotle responsible for the outbreak just reopened and I’m feeling ready to stomach Chipotle again — here is why:

The Chipotle outbreak was traced back to an employee at Chipotle who came to work sick. So, how did this worker infect 140 other people? The answer is not “appetizing,” but is simple. What likely happened is that viral particles from the worker, who was already sick, were spread to customers by the worker’s lack of hand washing after using the bathroom.

In other words, there were microscopic virus particles which remained on the employee’s hands after using the bathroom. These germs found their way to the customers’ food. The customers then unknowingly ate their way to a few days’ worth of being sick on the couch!  Once Chipotle customers were infected from the worker’s germs, they then started to spread the virus to anyone in close contact – again by ineffective hand washing.

So while I think we can all agree that anyone working in food service should take extra efforts to stay home when sick and wash their hands as thoroughly as possible, these are somewhat simple fixes. Other foodborne illnesses without a clear origin are the types that make me, as a public health professional, wary. These include foodborne illness from raw produce items (such as fruits and vegetables) or legumes such as peanut butter and almonds. Raw foods are then often made into packaged products, like peanut butter, and distributed to grocery stores. Then, by the time individuals become ill from the contaminated product, it takes more time, with more people becoming sick, before all the product can be removed from the market. The reason I’m ready to dive into a burrito bowl again is because I’m confident all Boston Chipotles, and probably all Chipotles nationally, are going to increase their efforts to make their food safe for customers. The founder of Chipotle recently wrote, “In the end, it may not be possible for anyone to completely eliminate all risk with regard to food (or from any environment where people congregate), but we are confident that we can achieve near zero risk.” This speaks to the nature of some foodborne illness and should serve as a reminder to all of us that simple tips like hand washing and staying out of contact with others will help to minimize all possible risk! Here’s to happy (and thorough) hand washing,