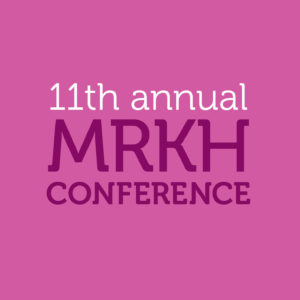 On March 19th I attended the 11th annual MRKH conference here at Boston Children’s Hospital. The conference was sponsored by the Center for Young Women’s Health. It was the first medical conference I’ve ever attended, and so I didn’t really know what to expect. I think if I had taken a guess about what I would experience on that day before hand, I would have predicted that the conference was going to be simply about a rare medical condition-but that could not have been further from the truth.

MRKH is an acronym for Mayer-Rokitansky Kusser Hauser syndrome, when 1 out of every 4-5,000 females are born without a uterus and incomplete vagina, rendering them unable to ever carry a pregnancy. MRKH is so rare that most doctors will never see it in their practice. For those doctors who do see cases, they are not prepared to care of these young women due to lack of experience. Thus many of the young women who share this diagnosis are seen by Dr. Marc Laufer and his experienced team at Boston Children’s Hospital.

The speakers on the day of the conference were women with MRKH and their friends, family, and loved ones. Each person was a little different. They were of all different ages. They came from all over the country, and even all over the world. Some were teens and some were adults. However, they all had this thing in common that set them apart from the rest of the world, which was MRKH.

What they also had in common was that they chose to get up in front of a microphone and talk about their lives in front of a crowd of people they didn’t really know. The audience got to hear their perspective about one of the most difficult things they’d ever had to face in their lives.

We all got to learn about their stories, even if at times it was hard. There were tears. There was laughter. There was a great deal of emotion that day. I think this was because by sharing their stories, they showed everyone how powerful they were in the face of such an unthinkable situation.

Like I said before, I arrived that day expecting to likely hear a lot of medical things most people don’t understand. But what I did end up learning was something everyone in the room, no matter who they were, could understand. This thing that brought everyone there, this struggle of theirs, didn’t divide them. It brought them all together as a community. The speakers made it so that everyone there knew that despite anything else, they would never, ever be alone.