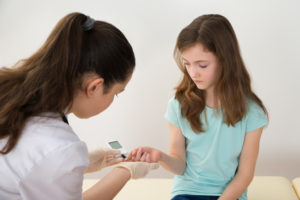 One typical summer night, I was scrolling down my Facebook page and came across a shared post from a Type One Diabetes page. At first, I only saw the picture attached to the article so I really was not sure as to what the post was going to be about. The picture’s caption was “What Diabetes Really Looks Like”. The image  was a girl sitting on her bathroom floor— a meter in one hand and  a cup of chocolate milk in the other. This girl, Madeline Milzark, and her picture and paragraph are worth way more than a thousand words.

In the post, Madeline bravely shares her feelings about how many use the word “diabetes” as a joke or to describe something that’s not so nutritious to eat. She wrote, “Diabetes isn’t your piece of cake, or that super-sized McDonald’s meal with extra fries, or anything you see coated with sugar. Diabetes is an 18 year old girl sitting on her bathroom floor shaking and not able to breathe because her blood sugar dropped and praying her grandmas phone is near her and she got the text message to bring some sugar since she’s too weak to yell and the whole room is spinning” (Milzark 1). Madeline makes it a point in her article to contrast the stereotypes of Diabetes versus the reality of the illness. Every diabetic has a unique story filled with highs and lows. Madeline’s post focuses on the fact that there are real faces to this disease.

I related to this post and felt that I have been in the same position growing up. I personally asked her if I could include her in my blog. If I had a dollar for every time someone asked me, “can you eat that?” I definitely wouldn’t be working a full time job at the moment. Hearing, “look at all this fatty food, this is totally Diabetes on a plate!” or “Soo… are you allergic to sugar?” is frustrating to a Type One Diabetic. You instantly think, how could they ask or say something so nonchalantly?

I began to realize that I shouldn’t get mad anymore. Unfortunately, the media does a terrible job portraying Type One Diabetes for some reason. So, it isn’t their fault that they are misinformed. Instead, I have to educate them about living with the disease; the accurate causes, and treatment. Education is key, and I believe that people such as Madeline Milzark make a positive impact towards the future of educating the public about Type One Diabetes.