Breakfast at the State House 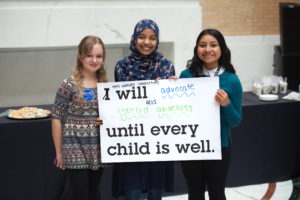 It’s crazy to think that after seventeen years of living in the city of Boston, attending the State House breakfast was the first time I had ever stepped foot inside of the building.  As embarrassing as it is to say this, I had no idea where the state house was even located. I recognized the general area but had never seen it up close with my own eyes. Once I arrived, I read the program and waited for the various bills to be presented.

The State House breakfast is an event where State Representatives as well as Massachusetts Senators come together to hear bills (from Boston Children’s Hospital employees and patients). All of the State Reps and Senators who attend the meeting can potentially pass or deny the bills that are presented. Thus, the results of the voting can positively or negatively impact future hospital programs.

One of the first things I noticed stepping into the building was what seemed to be hundreds of city flags throughout the room I was in, better known as the Great Hall. It’s amazing to believe that sometimes we have no idea of all that our city has to offer. I wouldn’t have known that such an amazing view existed within the four walls of one room. I could go on and on about how wonderful I think my State House is but I believe what I really need to discuss is the lasting impact that Boston Children’s Hospital has on each and every one of its patients.

Shortly after arriving I had the chance to hear former BCH patients share their stories about how the hospital has positively changed their lives as well as how grateful they are to all staff members who welcomed them with open arms. Hearing from patients gave me a much better understanding of why we are passionate, as a hospital, to get specific bills passed, because they will benefit the children and families that we serve. Although there were many bills within the legislative agenda presented to me during registration that day, this short blog just isn’t long enough for me to discuss all of them in detail. Therefore, I will discuss ones that I feel strongest about.

Both bills brought to my attention by the Public Health and Prevention Department are ones that I’ve thought of in the past. The use of tobacco, especially within my age group, seems to be normalized but in all honesty it shouldn’t be. I believe that if a person isn’t able to use a substance responsibly and may be putting others at risk, than they shouldn’t be using it at all. I’m totally in favor of an act that would increase the minimum age of tobacco purchase to 21. We teens aren’t the most responsible people out there so I feel like increasing the age could help with keeping everyone around us safe and comfortable. Another issue that caught my attention was the consumption of sugar sweetened beverages. Coming from someone who only drinks water and milk for more than a year now I can assure you that you’re not missing out on anything and you’re most definitely not missing out on the waste of money spent because of cavities. Although there were many topics covered throughout my day at the state house, these are a few of the bills that stood out to me. In all honesty this experience was unforgettable and I’m glad I was able to attend as a Center for Young Women’s Health peer leader and a Boston Children’s Hospital Teen Advisory Committee member.