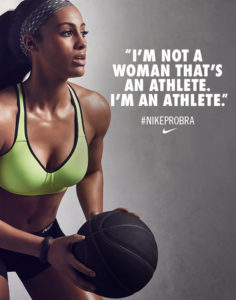 Have you heard of Stephen Curry? Michael Phelps? Mohammed Ali? What about Tina Charles? Kerri Walsh? Simone Biles? Well you should because according to Sports Illustrated, they are among the top 50 female athletes in the United States! Most likely, you know more about the male athletes than you do about female ones. That’s not your fault. It’s because media coverage for women athletes isn’t as extravagant as it is for male athletes. Women in sports are not talked about nearly as much as men in sports and the hype is truly misleading because there should be equal coverage and acknowledgements given to both sides of the sporting world.

Over the past few years, big companies such as Nike and Gatorade have begun to recognize female athletes and the growing female fan base through advertising their apparel. Nike, at the MTV Movie Awards, launched their #betterforit campaign so that female athletes would feel encouraged to push themselves outside their comfort zones with their fitness levels. Similarly, Gatorade promotes the support for female athletes through their ad campaigns to connect with female consumers. The increased visibility of female athletes allows young woman an opportunity to identify with strong female role models. The more advertising there is of women in the sports industry, the more likely other females will see this as encouragement to follow their own fitness goals. Success in sports isn’t just found in men’s athletics- women are just as good and they should receive just as much recognition for their accomplishments!