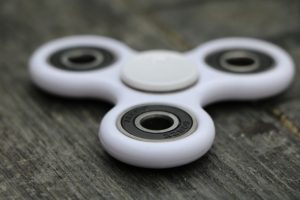 We’ve witnessed the power of the internet over and over again, but perhaps the most clear and impressive show of it came in the form of a 3 inch plastic toy: The Fidget Spinner.

The origin of the toy is almost as mysterious and controversial as its rapid rise to popularity.  Strangely, it has been available in a different but similar design for years, often used for children with autism or ADHD, however the actual science behind it is again an area of dispute. Some stand by its positive benefits, while others are quick to label it a distraction. Many schools have aired on the side of distraction, implementing rules regarding their use and some schools banning them outright.

In my opinion, it is no surprise that they became so popular. They satisfy the two most important aspects of internet fame: an ironic premise that is easy to make fun of and a satisfying aesthetic. Often times it’s the things that seem completely ridiculous that are in the forefront the most. It happened earlier in the year when an old clip of a girl on Dr. Phil disrespecting her mother went viral and in the span of a few months she gained 10 million Instagram followers, a record deal, and her own reality TV show. Last year, the internet famous trend “Pokémon Go” exhibited a similar phenomenon. Everyone seemed to be both playing it and making fun of it. In a more similar vein to the fidget spinner a toy called a fidget cube, which featured a dice-like shape with a joystick, light switch and other buttons positioned on its faces, gained popularity in late 2016. It however came nowhere near the fidget spinner in terms of units sold or viral fame. I believe this was due to its lack of a pleasing aesthetic. Part of the duality of fidget spinners is that although they look absolutely ridiculous for adults to be using, they are actually incredibly fun. There is something about the weight of the ball bearings, the sound it makes, the way your thumb fits in the pad in the middle, and how it seems to spin forever which makes it immensely satisfying to hold and use.

Fidget spinners are the latest in a bizarre trend in pop culture set in motion by social media. It is indeed a phenomenon that the internet has the power to create completely random trends which border obsession by its users.