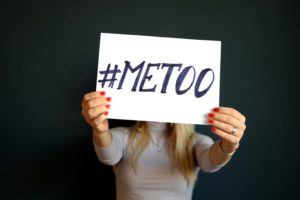 By now, many of us have become familiar with the #MeToo movement. Founded by Tarana Burke, an American civil rights activist who is credited as the first person to use this phrase (2006) to raise awareness about sexual abuse and assault, the hashtag most recently became a rallying cry for survivors of sexual harassment on Twitter. Over the past several months, the hashtag has lit up Twitter and Facebook, empowering survivors and allies to break their silence, and share their personal stories. The movement has led to the investigation of many perpetrators of sexual abuse including Larry Nassar, the sports medicine physician for the USA Women’s Gymnastics team. Just last week, he was sentenced to 175 years behind bars for his abuse of more than 150 young women and girls while he was meant to be providing medical treatment to them.

Sexual abuse and assault is a tragic, devastating reality of our world, especially for women and girls (who comprise an estimated 91% of victims). According to the National Sexual Violence Resource Center: “One in five women and one in 71 men will be raped at some point in their lives, [and] 46.4% lesbians, 74.9% bisexual women and 43.3% heterosexual women reported sexual violence other than rape during their lifetimes, while 40.2% gay men, 47.4% bisexual men and 20.8% heterosexual men reported sexual violence other than rape during their lifetimes.” I believe as a culture, we must all work together to challenge cultural norms and biases that lead to an environment where this violence can take place.

If you or someone you know has been a victim of sexual assault, check out these resources:

Remember: Sexual assault is never the victim’s fault. You are not alone, and there is help available.

Looking for ways to advocate?