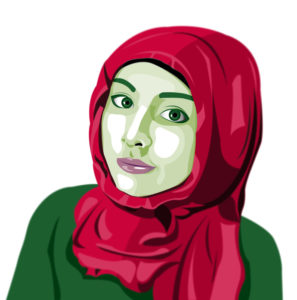 I think the best part about meeting new people is getting to know their perspective and views on different things. It’s so interesting to see how people’s backgrounds influence their thoughts. College is all about meeting new people from different walks of life. In my first two months of college, I have indulged in plenty of conversation and friendly debates over politics, religion, and social issues. I love to hear the arguments people make to prove their points. Sometimes I even get convinced to switch sides or reconsider my stance. However, it is so unappealing to me when people start up a conversation on a controversial issue only to attack anyone who disagrees with their viewpoint. Not only is this being close-minded but it is also depriving the person of learning about a different perspective.

As a Muslim woman who wears the hijab I am constantly being asked questions about my hijab and about Islam. I love being asked these type of questions and I love when people want to know more about me and my religion. But today, I had to deal with a girl attacking me about the reason for wearing my hijab. It all started when she asked,

“Do you consider yourself to be a feminist?”

Naturally I answered, “Yes I do, to a certain extent.”

We spent some time speaking about feminism and the feminist movement.

Then she asked me, “Why do you wear the scarf?”

I briefly replied, “I wear the hijab for modesty.”

She aggressively said, “So you aren’t a feminist because you cover yourself for men, when you should be teaching men about consent and how to respect women.”

I immediately tried to defend myself by saying it wasn’t about being modest in front of men, but she continued to bombard me with questions like, “But don’t you only wear it in front of men? So why don’t you wear it in front of other women?” I was immediately caught off guard. I was speechless. I had no clue how to answer her questions because I had never thought of my hijab in this way. I felt extremely attacked. She did not want to know anything about my hijab or my religion; she was only trying to push her own agenda.