I Was The Victim 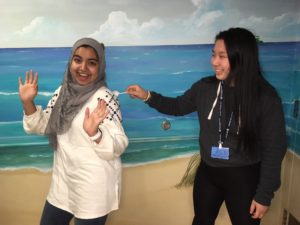 On Tuesday, April 25th of last year, I was personally victimized and my life changed forever. I stood in the hallway of the second floor, and the action that was done to me left me in utter shock—what was next to come would influence my life choices for the rest of my life.

It was a thriller. Waiting patiently for my prey, I was out to help a friend to survive—I was her last chance. I waited outside the classroom of our opponent and those minutes that I stood and watched my prey try to escape left me vicious and wanting for more. Each minute that passed where I watched him move itched my limbs to attack and pounce. But I waited. And that was the worst mistake of my life. Because at that moment, I was the one. I was the target.

My friend stood beside me, she was my worthy companion in the battle. I stood outside the doorway, with my back touching the brown border and my foot on the imaginary line between the classroom and the hallway. He stood in the corner of the classroom and his worthy companions were surrounding him, giving him the emotional support needed during this difficult time. But through his facial expressions, I could read feelings of distress, defeat, and hopelessness. He was about to give up because he had no other choice. Even his companions were patting his back saying “it’s okay man, give up your spoon, they got you trapped.” But he didn’t. Instead, he attacked me.

Let’s take a quick pause in the story and allow me to clarify what the spoon game is. Have you heard of “Assassins?” Well, it’s the same idea. In order to play, students must pitch in $5 and find a spoon, which serves as their shield and their weapon. Everyone who plays has a target and a killer. The way to “kill” is by tapping your target with a spoon when they don’t have a visible spoon in their hand. The winner is the last person standing and he/she wins half the money raised from the other players and the other half gets sent to a charity of their choice. Okay, let’s resume back to the story.

He walked slowly at first but then started pacing faster and faster and eventually, he sprinted through the door. The place where I was standing—let me emphasize, WAS standing— I was no longer in because he blasted through me, PUSHED me, and tackled me to the floor. Because he was surrounded, he took his best shot and that was to attack me—the girl who was standing in between his current state and his freedom.

I laid on the floor, pondering how I had just been humiliated. My friend was not able to trap her spoon game target because he ran right through me. I was only a junior and to witness such hostile acts—I learned my lesson. Spoons up, people—this year, I’ll be playing the same game I got played in.