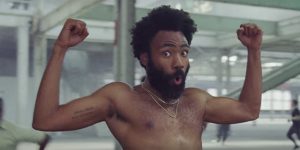 My friends and I always joke around about how Twitter is our daily dose of news. I am made aware of everything happening in the world through Twitter and trending tweets. One specific thing brought to my awareness through Twitter was the Childish Gambino music video for his latest song, “This is America”.  I remember scrolling through Twitter and finding all these references and reactions to the music video. I personally do not listen to much of Childish Gambino’s music, so at first I did not think much of it. However, it was when I went on Twitter again later that day and found that the music video was still trending that I knew I had to watch it. Just from reading some of the tweets I knew to expect racial symbolism in the music video.

The first time I watched the music video, I did not understand many of the references, and I was actually a bit confused because of everything that was going on. As I scrolled through Twitter again, I found some tweets that shed light on the references Childish Gambino makes in the video. For example, many of the weird faces and body stances he makes throughout the video are actually mimicking Jim Crow racial caricatures. It was amazing to go back and watch the video and notice how subtly he does this. I barely even realized it the first time.

Also just by reading several tweets on the music video, my attention was brought to the chaos in the background of the video. Childish Gambino is dancing throughout the whole music video, sometimes with a group of school kids and sometimes alone. Yet, there are people running around in the background of the video, some dressed as civilians and some as police. This may be a reference to police brutality. There is also a young man filming on his cellphone, which may reference the police shootings of innocent black men that have been caught on cellphone cameras. Again, I never would have noticed this the first time around because I was so focused on Childish Gambino’s dancing. Just the fact that my attention was diverged to his dancing may reference how people get so distracted with social trends, like music and dancing, that black people start, that we tend to forget about the more serious incidents happening to black people every day in this country.

One of the most shocking scenes in the video is when Childish Gambino casually stops dancing in order to shoot an entire black choir.  Of course when I first watched this video I did not understand the reference, but after reading through even more tweets, I realized that this scene may be referencing the 2015 shooting in Charleston, where nine black people were killed in a historical black church. Personally I did not immediately remember this shooting, so I had to go back and read news articles on the event. I was amazed at how a music video could persuade me to want to read the actual news. I had noticed that in the music video every time Childish Gambino would shoot someone, another person would come take the gun away in a carefully handled red wrap. This may reference gun laws, by suggesting that in this country guns are taken care of more than people’s lives and safety.

I am impressed at how Childish Gambino is able to reference so much in just one music video and how he ties everything in so skillfully that I was not able to see the symbolism right away. I must have watched this video over a dozen times already in order to make all these connections and understand all these references. The video is gaining more and more fame because of its cultural relevance. This shows how influential music can be. It also shows how much one can learn from just scrolling through social media.

Tagged with: childish gambino, Music, social media, This Is America