Water, Water Everywhere and Not a Drop to Drink 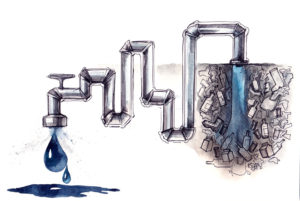 You know what is absolutely mind blowing? Flint, Michigan still does not have clean water. Water is a basic human right, something we all need for survival. I believe that the fact that there are people all around the world who do not have clean water is shameful, and the fact that more is not being done to ensure that everyone has access to clean water is immoral. How can we even begin to help other countries let alone the world when there are people right here in the United States who don’t have access to clean water?

Flint, Michigan has been without clean water for almost four years now. Four years may seem like a short amount of time but try to imagine how much you have accomplished in four years. Our entire high school careers last four years. Imagine spending all of high school having to boil all your water before using it. Having to shower and cook with only bottled water. The people of Flint, Michigan do not have to imagine this. This is their reality.

The problem started when the city decided to switch their city water supplier in order to save money. The new city water supplier then decided to switch to using water from the Flint River, while new pipelines to Lake Huron were being built, after a recommendation from the city council. That was the beginning of the downfall in Flint. Only 4 months after the switch, the city had to declare a boil water advisory after finding harmful organisms contaminating the water. As a solution to this problem the city increased the water’s chlorine levels. This led to the problem of the water being harmful because of its high amounts of chlorine. The result of the chlorine eventually led to an excess of lead in the water. Water that is infected with high amounts of lead has many health risks. This began to affect the residents of Flint in many different ways such as developing rashes and other unusual illnesses. Four years of lawsuits and protests later, and the problem in Flint still has not been resolved.

If anything, in 2018 the water problem has become worse not better. Without any improvement in sight, the Governor announced the end of the free bottled water program. How can we call ourselves a first world country when there are people suffering from a water crisis at home? This whole situation began because some people wanted to save money. The money required to fix the problem definitely exceeds the money that would have been saved. At least twelve people were killed because of Flint’s water crisis. Where did we go so wrong that we began to prioritize money over human rights? We need to speak about Flint more. We need to understand exactly where and how this problem started in order to avoid anything like this again and we need to ensure that Flint gets clean water now.