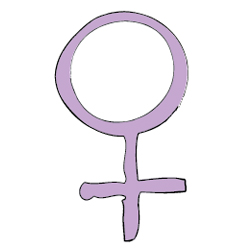 Hello Teen Speak! Earlier this year I was diagnosed with OHVIRA (Obstructed Hemivagina and Ipsilateral Renal Anatomy) — at least we have a nice sounding acronym 🙂 Essentially having OHVIRA means that your anatomy is a bit different in a few areas. First of all, I have only one kidney and additionally two uteruses, two cervixes, and two vaginas with a blockage in the right side of my uterus. Now, let’s delve into my story…

The last thing anyone wants in high school is to be different. Sure enough, during my sophomore year I found out that I indeed was different, and I had always been this way, but never knew.

My beyond normal pain during my period started after several months. It got to the point of missing school or plans with family and friends, so I could curl up on the couch with my heating pad. I began feeling especially run down after the new year and was having persistent pain on my right side that led to a visit with my pediatrician. She sent me to the local emergency room (ER) where they were most concerned with appendicitis. They drew blood, did an ultrasound and an MRI, with the hope of seeing my appendix (which ironically they never saw). My mom and I sat in the ultrasound room with a very confused tech, who was trying to decipher what I would later know to be my OHVIRA anatomy. At this point, the ER doctors realized that I was going to need specialized attention and referred me to Boston Children’s pediatric gynecology program.

By some stroke of luck, I was able to get an appointment the next week. When I described my symptoms to Dr. Laufer, he quickly asked if they looked at my kidney(s) in the ER. This had not been the case, so he squeezed us into ultrasound to get pictures of my single kidney, as I soon found out. I vividly remember leaving that ultrasound and asking the tech if both of my kidneys looked good. She said, “well you actually only have one kidney.” That would be the first of many ultrasounds for me.

In April, I had surgery to clear the blockage on my right side. The surgery was a success and I was surprisingly very calm all morning. However, my blockage did cause me to develop endometriosis so, in addition to recovering from surgery, I had to learn how to cope with endometriosis symptoms. Endometriosis occurs when the lining of the uterus, called, the “endometrium”, is found outside of its normal location. This often causes pain because the tissue bleeds every month just like the uterine lining. The Center for Young Women’s Health has several articles on endometriosis, link here. While the prognosis looks very good for my endometriosis to go away over time, I don’t know how much time. Through this experience, I have learned to face many fears and how to anticipate when symptoms are developing to take care of myself to the best of my ability.  As a result, I am better at managing pain and symptoms associated with my OHVIRA. Even in the most challenging moments, I feel extremely grateful that I am receiving the amazing care at Boston Children’s Hospital. I hope by sharing my story, someone else out there feels a little less alone. You’ve got this OHVIRA warrior!!