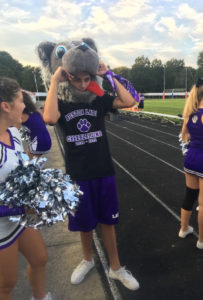 Along with the closing school year and climbing spring temperatures came a day that would change my life forever (dramatic, but true.) Cheer tryouts were just around the corner. Being a gymnast my entire life, I had already achieved the athleticism required to be a cheerleader. I had friends on the team begging me to try out, and I would constantly tell them “No, I would never cheer!” Still the notion of being on the team was something that had piqued my interest for years. Of course I never told anyone this, because the thought of being ridiculed for being a boy on cheer was terrifying to my 8th grade self. The curiosity reached an all-time high, and months of going back and forth finally resulted in me stumbling to the nurse’s office to pick up a cheer tryout clearance form. It was official. I was doing this.

The first tryout day finally came and all day I couldn’t think about anything else. Sitting in my last period class, I was plagued with thoughts of not trying out and just heading home instead. This instinct of nerves was launched into action when right before the dismissal bell rang I got a text from my wrestling group chat that read, “Hey guys, let’s help the cheerleaders and bring mats down for their tryouts.” There was no way I wanted them to find out I was trying out. As silly as it sounds, I was terrified of anyone judging me for doing cheer–especially the wrestling team I would have to inevitably quit in order to join the cheer team. In response to the text, I bolted out the front door and hopped on the bus.

About five minutes into the bus ride a friend of mine tapped my shoulder and asked, “Why aren’t you at cheer tryouts?” I responded, “Oh, I got nervous and left. Maybe I’ll go back tomorrow. I have a lot of homework tonight.” My friend could smell the excuse, and could clearly tell my nerves got the best of me. She ripped my headphones out and proceeded to say, “You have to go back, you’ll regret it!” Before I could respond, she had pushed the ‘stop requested’ button. The bus stopped about a ½ mile away from the school, and I got off.

My anxiety-ridden legs brought me back to school in a hustle, because now I was late. Once I got back inside the school and outside the gym doors, I stood for a second, took a deep breath, and walked in. The rest is history.

As the Varsity captain for this upcoming fall, it is almost impossible to imagine my life without cheer. I’ve had so many doors open for me because of it, and have met so many amazing people from it. I’m so grateful for that friend I rode the bus with that day for reminding me that chasing your interests, (though easier said than done,) is the most rewarding thing you can do.