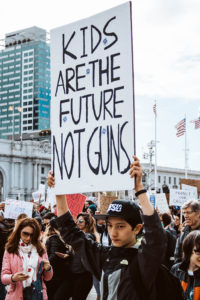 “Attention all students and faculty, the school is now entering safe mode due to an external threat.”

My heart drops. Surely this is has to be a drill. My only choice is to swallow fear, follow orders, and proceed to the nearest classroom. Rumors fly. No one knows the real story, solely a composition of background noise from unreliable sources. Nobody knew what to believe. After what seemed to be hours, the police officer, adorned with bullet proof armor, came in through the office doors to declare that we are now cleared to leave the building. The external threat? A balloon popping, which sounded like gunfire.

A balloon popping had the ability to lock down an entire neighborhood in a matter of minutes. Why is that? Well, mass shootings, especially in schools, have become more frequent in the past decade, according to the Federal Bureau of Investigation. The rapidly growing frequency in these violent acts has led to an evolution of human behavior, where analyzing everything through an overly cautious lens is necessary. This is the reason why we hear gunshots in fireworks, thunder, or even in a popping balloon. The effect of rising gun violence in America is quickly exiting the realm of normalcy. This new fear leads to new obstacles in our day to day lives. It has caused Americans to take extensive precautions to prevent another shooting.

We do have the right to be fearful of mass shootings. These fears, although legitimate, are beginning to disrupt society’s normal functions. Until we resolve the issue of gun violence in America, its wavering effects will leave us either attributing it to the mentally ill people, or pondering if guns are appropriate in the hands of educators. But for now, the problem remains, and all across this country there are children in schools, fearing for their lives, just as I was. Unbeknownst to me, the source of this fear was something as trivial as a balloon.