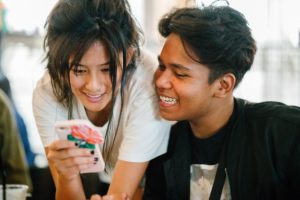 I don’t remember when I learned how to use a computer, a phone, or even when I learned how to talk. Just like all the other things I learned in my younger years, it developed slowly from exposure and trial and error. For me and for a lot of other teenagers, it’s an integral part of our being. There was no transition period, we’ve known what they are and how they work our entire lives. We can all speak technology, we know how it works, and we can usually figure it out if we don’t.

Our lifetime exposure to technology has lead us to plenty of practice, experimentation, and discovery. We are able to text at a brisk pace, switch between our phones and reality, and navigate new app update. I’m usually able to have multiple conversations, play a game, Google a question for biology class, and do the dishes all at once. While some would call this efficient, others (including myself) can find this oddly terrifying. Being able to be completely absorbed by a magical rectangle in your pocket can allow for some much needed escapism, but it can take the “human” out of human interaction. Some of my friends merely exist as text on a screen, either having fallen out of my life or never having been in it outside of a computer. While I cherish my friends and wouldn’t give them up for the world, it goes to show how reliant on technology we all are. Many things have been lost to us since we lead very different lives than those before us: Reading, watching the news, taking some time to think, and many other things have become old-fashioned and boring. Our brains are wired differently, too busy with something else to be able to do something quiet and slow. Our stressors are fast paced and effortless, but so is our relaxation.

While our technology has certainly taken some things from us, it has also given a lot. We’re more connected than ever as a species. If I wanted to, I could call up my Chinese exchange student and have a quick conversation across almost 7000 miles. The only thing I would need would be an internet connection, a generous cell plan, and a texting app allowed in China. If I wanted to do anything with my friends, I could create a group chat in seconds and find something to do. Certain social causes have been boosted by the internet as well, gaining more attention than they ever could before it existed: Climate Change, the Hong Kong Riots, and the #MeToo movement are just some of the larger movements that have benefited from some online attention. People could share their stories, data, and suggestions for change all in one place. Being shown some of the injustices of the world at such an important age also has allowed my generation to become one of activists and go-getters. Protests, marches, and rallies have become a part of our lives. While it may have removed some parts of everyday life, the internet still stands as a force for good if used properly. It is a valuable asset to us as we try to build a better world.