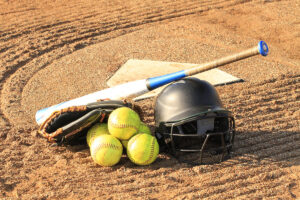 Throughout the last few years of high school and middle school, I have always wanted to try out for the school softball team. As a child, it used to be my favorite sport and my Friday night recreational games were the highlight of my week during the spring and summer. However, when I got to middle and high school, my love for playing was marginalized as I took on different extracurriculars. Between doing cheerleading for the majority of the year, working at my waitressing job, going to clubs, and keeping up with my school assignments, it felt impossible to add another activity to my already overwhelming schedule. I still often thought about playing again, yet every March the week of tryouts would come up, and I’d convince myself not to go.

At the end of my junior year, I had just about given up on my goal of playing softball again. Then, however, for the first time in years, I found my schedule almost completely empty. Because of the pandemic, I found my shifts at my diner limited, my cheer practices canceled, and just above everything else was stalled for the time being. In spite of all the canceled events, the town softball league was starting up at the beginning of the summer. With the encouragement of a friend, I realized that this would probably be the last chance I ever had to play and I decided to try out for the town softball league.

While I was definitely nervous those first few practices and games, I am so glad I made the decision to try out. Instead of spending my summer nights just lounging around my house, I was out exercising and staying in shape. It was exhilarating to once more play my favorite childhood sport. Not only that, but as one of the only team members with a car and a license, carpooling to games became a whole new kind of team bonding. My summer that I had originally predicted to be dull and boring was exciting and fun all because I decided to stop overthinking everything and play softball.

Despite being upset about missing my cheerleading team and feeling like I was missing out on my first senior year experiences, I’m still so grateful that I had the opportunity to play softball last summer. I now know that I’m never going to have to wonder again what would have happened if I had just tried out for the team, because I did. Now that the summer’s over and I’m content knowing that I really will not play softball again, my memories will always be a reminder to myself to go for what I want in life.