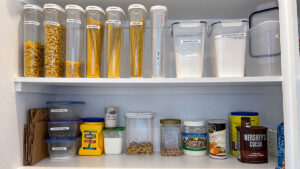 Have you ever worried that food would run out before you (or your family) had money to buy more? It’s possible that if you haven’t faced food insecurity, you know someone who has. That’s because food insecurity is a common problem that isn’t often talked about. Food insecurity occurs across the nation to many different people. So, what is food insecurity? It’s defined as a disruption in normal eating due to a lack of resources.  Some people think that to experience food insecurity, one must go hungry for extended periods of time, but this isn’t true. Hunger isn’t necessarily an outcome of food insecurity but it can be part of someone’s experience with lack of access to food. Actually, food insecurity can happen at different levels. What people most often think of is: Very low food security which includes: “multiple indications of disrupted eating patterns and reduced food intake.” But, there is also something called low food security which includes a “reduced quality, variety, or desirability of diet. Little or no indication of reduced food intake.”

Unfortunately, teens are at increased risk of food insecurity. This can happen for a variety of reasons, but the main reason is because teens need to eat more food to meet their nutritional needs! This means that even if you have food in the house, you might eat it and still be hungry for more but there either isn’t more to eat, or you don’t want to take it from other people in your household. If you have siblings that you’re worried about, or even a parent, it’s common to eat less to make sure that everyone gets enough. It’s also important to understand that some people are affected by food insecurity more than others. One in four African- American teens are food insecure and African American and Hispanic households experience food insecurity at a much higher rate than other families.

Talking about food insecurity can be scary. Sometimes teenagers feel the need to protect their parents from feeling bad about not having enough food in the house or you might worry about what your friends would think if they found out.  But it’s important to know that not only is it ok to talk to someone if you have inconsistent access to a healthy food or an inability to access enough food, it’s so important to your health and wellbeing! Having access to food will improve your mental health and can help you concentrate at school. You should also know that there are lots of resources to help!

Things you can say to someone if you’re experiencing food insecurity:

People to talk to if you’re experiencing reduced food intake or reduced quality in food: