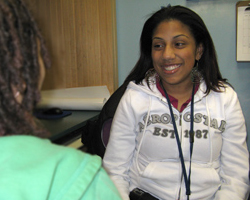 One of a girl’s most common problems involves boys. Most of my girls come to me with their boy drama. Usually it’s something typical like – I think he’s cheating on me, should I break up with him? – and more. One of my friends told me that she was thinking about breaking up with her boyfriend. This is also one of the girls that told me she loved him. I asked her why she wanted to break up with him and she told me that it had to do with the possibility of him cheating. I did not want to influence her decision either way because if the results were unfavorable I did not want her to blame it on me. I talked to her and told her that before she did anything that she was going to regret, she should calm down and talk to him. Even if she did end up breaking up with him, at least she would have had the satisfaction of knowing that she talked to him, cleared things up, tried to fix things and didn’t just break up with him over a misunderstanding – which later would add on to the pain of knowing she broke up with the boy she claimed to love.

With that being said, even if your problems range from being stressed because of school, family, or other things make sure you talk to someone about it and I guarantee you will feel a lot better.

One more thing: If you feel like your issues are too much to handle please make sure you talk to your parents or another trusted adult in your life!