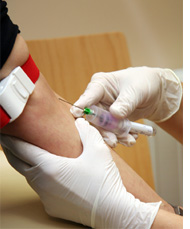 It’s understandable that some people don’t like going to the doctor. Doctor visits are often associated with things such as getting blood drawn, vaccinations, etc. Although they might seem scary, these services are necessary to keep our bodies healthy. What doesn’t make sense to me is that in general, more girls go to the doctor than guys, and when guys do seek medical care, they only do so because they were told to by a female close to them (such as their mother, sister or girlfriend).

At our recent Youth Advisory Program (YAP) meeting, the other CYWH Youth Advisors and I had a discussion about why guys don’t go to the doctor and what might encourage them to go. We talked about how some guys take their girlfriends to a medical appointment, and how this might be a good way to get them interested in going to the doctor for their own health care. Someone suggested that we could approach guys when they come to the outpatient waiting room and ask them whether or not they have a health care provider. If not, perhaps we could tell them about the health care services available for guys here in the adolescent clinic.

Another thing we talked about was the possibility of hosting a focus group for guys so that they could have the opportunity to talk about different health issues that they’re interested in. We also thought that guys might be more likely to attend a focus group if an incentive was provided – such as food and/or a gift card. The fact that guys don’t seek routine medical care is a really big concern, because they may not have access to critical health information such as how to prevent and care for sports injuries, healthy nutrition habits, how to prevent STI’s, and how to get and use condoms. Since teen guys may be sexually active with one or more partners, it’s essential that they know how to prevent the transmission of sexual transmitted infections. With that being said, health care visits are necessary so that ANY health problems can be prevented and/or detected and treated early.