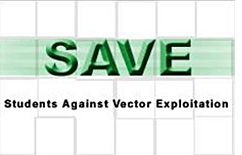 While doing some research for work, I came across an article about the organization S.A.V.E, which stands for Students Against Vector Exploitation. This article immediately caught my eye because Vector Marketing is a company that contacted me about applying for a job, and I jumped at the chance.

Vector is a marketing company that has been targeting young students for years with their catchy ads that sound more than appealing. I received a flyer from them in the mail about a month ago which instructed me to call to apply. The ad stated that if I was hired I would  immediately make about 30 dollars for each appointment I scheduled. It sounded a little like the cosmetics company Avon, which hires representatives to sell their products; only with Vector all I had to do was make an appointment. Boy was I wrong.

In the article, I learned that Vector hires you to sell professional knives by going to peoples houses and doing demonstrations. Based on a study by the 1996 Washington Post, more than half of Vector representatives lost money rather than earning it. If they did make money, they earned on average, about 3 dollars a day.

When they hire you, you have to buy or put a down payment of approximately 200 dollars for a knife set to demonstrate with. You also have to go to trainings that you don’t get paid for. Think about it; most people are reluctant to let strangers in there homes, let alone with a set of knives! Also, the knives are fairly expensive and hard to sell in this economy. So, basically as a Vector representative you have more out of pocket expenses than you are earning. They also target young students because they know we are easily manipulated and don’t really look into things before getting involved. So for anybody who has been or may be approached by Vector, beware.