Parents and Teens – Having “The Talk” 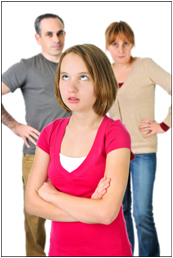 I just read Children’s Hospital Dr. Claire McCarthy’s Thrive blog about parents talking to teens about sex – oral sex in particular. I’m quite unsure about how I feel about it. I’m 20 years old, and the truth is that I still don’t feel comfortable talking about sex with my mom. I think it’s awkward when she asks me if I’m having sex, so I know it would be even more embarrassing if she tried to talk to me about the details of different types of sex. I know parents think it’s hard to talk to teens about sex but guess what – it’s hard for teens to hear it too.

I definitely agree that teens need to know about sex and I absolutely think that they should start learning about it at an early age, but I don’t think sitting down with mom is going to do it. For the most part, teens probably won’t answer their parent’s questions truthfully (if they are having sex – they’ll probably say they aren’t), and another thing is that chances are, they’ll tune out of the conversation to make things less uncomfortable (by using the smile and nod technique).

Instead of sitting down for “the sex talk”, parents can give information to their child by bringing up general sex topics. Obviously though, it has to be during a relevant conversation; you can’t be talking about food and then say “oral sex is sex too” – that’s just random. You could say something like “sex is something serious and can have negative consequences”. Mention that although you can’t get pregnant by having oral sex, it’s still considered sex. However, don’t get into details and ask if they are having sex or spend too much time on the subject all at once. I feel like this approach might work, because it then gives teens the option to speak up if they actually want to have a conversation about it. Another good idea for parent(s)/guardian(s) is to remind your teen(s) that they should be truthful with their health care provider (HCP) so they can get the best medical care. That way if they have questions, they can always go to their HCP for the answers.

The health information on our website (youngwomenshealth.org) is very helpful, but it doesn’t replace a conversation with your teen. Parents – try and understand that your kids are just as uncomfortable talking about sex with you as you are with them.