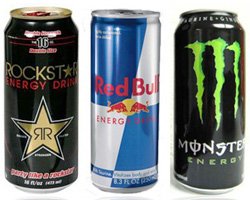 There’s a lot of buzz going around about energy drinks such as Red Bull, Monster, Rockstar, and 5 Hour Energy®. Energy drinks are marketed with many promises that range from boosting energy to increasing athletic performance or even weight loss. However, these so-called “miracle drinks” may not live up to their expectations. They may actually cause more harm than good.

A new reports suggest that energy drinks and shots may be dangerous, especially for teens, young adults, and those with certain health conditions such as heart problems and diabetes. Most people can drink caffeine in moderation without a problem, however, teens and people with medical conditions can suffer harmful effects even when low amounts of caffeine are consumed. Heavy caffeine consumption has been linked to serious consequences such as heart palpitations, seizures, strokes, and even sudden death. In 2007, more than 5,000 caffeine overdoses occurred in the US, and almost half of them were in teenagers!