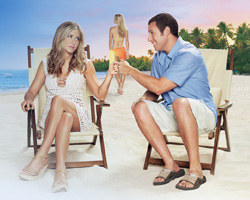 Recently, I went to the movies with my girls to watch Just Go With It. It was a really funny movie. I’m not going to explain what the movie is about because I don’t want to spoil it if you’re planning on seeing it.

As I was watching the movie, my friend and I realized that the movie seemed to emphasize a lot of racial stereotypes. For example, the Hispanic baby-sitter was somewhat chunky and her outfit didn’t match. She was portrayed as someone who didn’t really pay attention to what the children did because she was either too busy talking on the phone with her boyfriend or playing video games.

The gay black hair stylist sounded kind of ghetto and was very flamboyant. He said something like, “Oh no girl, we gotta do somethin’ with that hair – it’s a mess!” The Hawaiian baby-sitter was like the Hispanic baby-sitter, except that her “thing” was watching TV, eating, and falling asleep while she was supposed to be watching the children.

At first I thought that they didn’t include a stereotype for white people, but they did. Adam Sandler accused his “wife” of taking all types of pills (recreationally). I felt like these characters probably did help make the movie funny, but in the end, the movie still stereotypes different races. I just want to make clear that there are a lot of stereotypes out there and everyone has their own opinion. However, you can never say that an entire race acts one way just because some do. Stereotyping is harmful not only because the accusations are often false; they often offend people too.

On the other hand, the stereotypes in this movie weren’t a major part of the plot and weren’t directed to just one race, which makes things a little better. I really think that Adam Sandler was trying to make a joke out of stereotypes. I just wonder if anyone else that watched the movie picked up on this too?