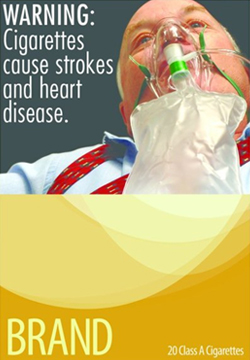 The Federal Food and Drug Administration (FDA) recently mandated that all brands of cigarettes carry new packaging labels starting September 2012. The new labels have graphic images of the consequences of smoking, such as fatal lung disease, cancer, and heart disease. Apparently the labels are meant to encourage people to quit and discourage young people from starting. I think this is a good idea, because although there’s information out there that literally proves how bad smoking is, smokers tend to ignore or forget about it when going to purchase a pack. Having graphic images on the cigarette packages themselves is going to make it harder for them to ignore the potential consequences of smoking.

On the other hand, I don’t see why cigarettes aren’t banned all together. Evidently, the FDA finds them to be harmful, and has listed many health problems (most of which are deadly or very serious) that result from smoking. So why not just ban them and help people quit that way? It’s true that even if at some point they are banned, they might end up being sold illegally (like marijuana), but I think it would decrease the number of users. A lot of people don’t like the idea of using an illegal substance, so that in and of itself might make them quit. For whatever reason, the FDA isn’t making them illegal, so I guess for now, the new packaging laws are a good option.