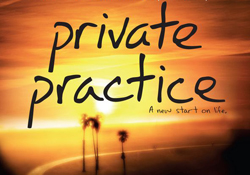 If you happened to watch the show Private Practice last week on ABC, you would have learned a little bit about MRKH, which is an acronym for Mayer-von-Rokitansy-Kuster-Hauser syndrome. One of the story lines was about a 20 something woman with MRKH who had an unsuccessful uterine transplant. It was disappointing that there wasn’t more in the script about successful MRKH treatments or more about the psychological affects that this diagnosis can have on a young woman and her family. I feel that ABC should receive kudos for raising awareness about MRKH; however the episode failed to give a realistic view of what it’s really like to find out that you’re born with incomplete reproductive organs. In addition, the episode may have given false hope to women that uterine transplant is a realistic option.

In “Deal With It” (Season 5, episode 3), a character “Nina” shows up at the Seaside Wellness Group expecting to have a uterine transplant. We find out that she knows she was born with MRKH (Mayer-von-Rokitansy-Kuster-Hauser syndrome), a congenital reproductive anomaly of the reproductive system. (MRKH happens during fetal development and is also referred to as a birth defect.) Make no mistake – young women who are born with MRKH are in fact genetic females. They have two XX chromosomes just like any other female. The difference is that when their reproductive system was developing (while they were still in their mother’s womb), the organs didn’t complete development. This happens in 1 out of every 5,000-10,000 female births, but a young woman doesn’t typically find out that she was born without a complete vagina or uterus until she’s a teen.

Why, wouldn’t she find out earlier, you might ask? Well, remember, women with MRKH have normal ovaries, so they experience puberty like any other young woman. The difference is that 9 out of 10 girls with MRKH do not have a uterus, and therefore they won’t have a period. Not having a period is the number one reason why a 16 year old might visit her health care provider’s office. If her doctor suspects MRKH, the young woman will likely be sent for an ultrasound or MRI to see if she has a uterus. A pelvic exam may also be done. If the young woman has MRKH, her doctor will probably see just a dimple or a very small opening, where the vaginal canal should be.

“Nina” (the Private Practice character) is aware that she doesn’t have a uterus and has made the decision to have a uterine transplant. Her 66 year old grandmother has offered to be the donor. Dr. Addison Montgomery is shocked by this request and doesn’t support the patient’s decision stating that “it’s a very dangerous procedure with no long term success to date.” That’s when Dr. Reilly steps in to save the day and claims that he can do the surgery.

Okay, back to reality. What is he thinking? Dr. Montgomery is right, uterine transplants haven’t been done with any success in Europe or the United States, and the risks are huge; including rejection of the transplanted uterus, severe bleeding, and possible death, yet Dr. Reilly is adamant about doing the operation. Fast forward to a scene in the OR at Saint Ambrose Hospital during the uterine transplant surgery. As soon as Dr. Reilly unclamps the donor uterus, the patient begins hemorrhaging. The outcome is no surprise – the transplant doesn’t work and the patient is super disappointed. However, she does survive the surgery and is later comforted by Dr. Reilly who tells her that she can have a baby she will love either through surrogacy or adoption.

In real life (not the Hollywood version), treatment options for MRKH include vaginal dilation, and surgery if dilation doesn’t work. Vaginal dilation is a nonsurgical option and involves stretching the vagina over time with a dilator. I know it sounds weird, but think about how in some cultures people stretch their earlobes or necks. Skin can stretch. Using a plastic dilator (that resembles a tampon), a young woman can stretch her vagina just by applying pressure for 15-20 minutes once or twice a day.

Another thing that bothered me about this episode was the title, “Deal with It”. Learning that you have MRKH is often devastating. A blogger on Children’s Hospital’s “Thriving” writes, “Learning the reality of my diagnosis – that I would never be pregnant and carry a child, and that I was born without a vagina – devastated me. It shattered my confidence, robbed me of happiness, and put my strength to the ultimate test.” So, “dealing with it” takes time, a lot of soul searching, support from family, friends, loved ones, and a team of health care providers who are experienced with treating adolescents and young women with this condition.

I’ve had the privilege of working with young women who have MRKH for more than 15 years and I continue to be amazed at how incredibly resilient they are. They’ve been given a huge burden to deal with. However, when they are given the opportunity to express their emotions and receive support from their family, friends, loved ones, and medical team, they do overcome the stigma of having MRKH. At the Center for Reproductive Anomalies at Children’s Hospital Boston, we offer expert gynecological care, educational resources for patients and families, support including sessions with an experienced social worker, monthly internet chats moderated by a nurse specialist, and a yearly conference for young women with MRKH and their families.

I would like young women with MRKH to be hopeful that they can have their own biological child with a surrogate carrier or feel fulfilled by adopting a child if having children is their dream. The raw emotions that a young woman feels when she initially learns of her diagnosis will dissipate with time. It does get better. Teenagers diagnosed with MRKH are like other teens trying to grow up in a world full of challenges; only they have more to deal with. My hope is that all young women with MRKH can work through their feelings, acknowledge what amazing people they are, and not allow MRKH to define them.