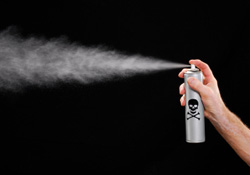 I’m sure that most of you are tired of hearing that drinking and driving is bad, but how often do you hear that driving under the influence of other substances is bad too? Unfortunately, I know a lot of people that think it’s okay.

Drugs are mind-altering, and I think this is probably why some people choose to use them. I suppose if they didn’t cause any effects, then people probably wouldn’t use them. Unfortunately, many teens have taken to inhaling dust cleaners and other substances that come in cans with compressed air to get a mind-altering effect, or a “high”. This is called huffing.

I think huffing may be common among teens because the products that are being huffed are legal and easy to buy. Even though inhaling dust cleaners isn’t illegal, operating a car under the influence is. Huffing is bad, but huffing and driving is unacceptable. According to a recent story in the Boston Globe, a 17-year-old girl who was huffing lost consciousness while driving and hit two pedestrians. She was charged with “two counts of assault and battery with a dangerous weapon causing serious bodily injury and negligent operation of a motor vehicle”.  Both of the victims remain hospitalized and one is in a coma. It saddens me that teens can be so irresponsible. These innocent people are now suffering because of this girl’s irresponsibility, and the girl herself is facing serious charges. I hope that her actions have consequences, because she needs to learn a huge lesson that others can hopefully learn from as well. It’s crazy to put your life or someone else’s life in danger for a quick high.