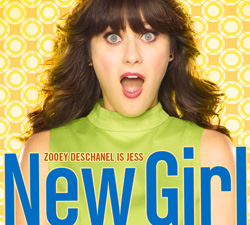 Does anyone out there watch “New Girl” on Fox? Last weeks episode “Naked” had the characters spouting some of the funniest euphemisms for male and female genitalia I’ve ever heard. (If you haven’t seen it yet, I highly suggest watching.) Aside from the fact that I’m in love with Zooey Deschanel, this episode really resonated with me because my friends and I totally used to be those girls when we were younger – you know, the ones who couldn’t say penis or vagina without giggling and turning bright red.

The thing is though, Zooey’s character “Jess” is a 20-something year old school teacher. We think of 20-somethings who hold jobs as grown ups, right? So what’s up with a grown up who can’t use grown up words? I’m not going to spoil the episode for you, but let’s just say a situation arises in which Jess needs to use the proper terms for male and female genitalia… but she can’t. Instead of saying penis and vagina she says things like “bing bong and chickadees” and “gumbo pot”.

I laughed. A lot. I watched the episode again and I laughed some more. (In fact, I laughed so much that I felt the need to post about it on Facebook and tell everyone how much I laughed about it.) Then I got around to thinking, and maybe the reason I found this episode so amusing is that it’s true to life. I actually do know “grown ups” (real ones; not TV characters) who can’t (or won’t) use the proper terminology for male and female anatomy. Even worse, I know grown ups who don’t even know the anatomical facts about their own bits and pieces.

I’m getting a little off topic here, but I took a really great Women’s Studies class a while back. One afternoon in lecture at the very beginning of the semester, our professor had us participate in two really interesting exercises. First we were asked to think of all the slang terms we’d heard (or used) for penis and vagina and write them all down. Then we took turns shouting them out, and our professor wrote them down on the blackboard. I didn’t hear any “bing bongs” or “gumbo pots”, but use your imagination here… we definitely came up with some choice terms.

After we got our sillies out, we had to learn to use grown up words. At this point in the semester, we were all sitting next to a bunch of guys and girls we hardly knew, but we had to say “Penis, Penis, Penis, Vagina, Vagina, Vagina.” out loud, in unison, and with a straight face. (For those of you in the appropriate age range to have seen the movie “Varsity Blues”, yes; it was just like that.)

The second exercise involved drawing. We were instructed to draw a penis, in something like 30 seconds to a minute. Then we had to switch papers with the people next to us so we got to see what they thought a penis looked like. Those drawings weren’t half bad. The real kicker was the second part of this exercise where we had the same amount of time to draw a vagina. I can’t even explain to you what I saw and how embarrassing it was. By embarrassing I mean that hardly anyone knew where to begin regarding what to draw, and from what I saw, hardly anyone knew what a vagina really is. I’m guessing our professor had a hunch this would happen, because she went on to give us a little bit of artistic anatomy-101 (she drew a penis too – it was an equal opportunity lesson).

That day, my classmates and I became grown ups. We learned to say penis and vagina, and we learned what they looked like and what they actually are.

So, like “Jess” if you’re embarrassed because you can’t say certain words, or you’re not really sure what “down there” looks like or does – you’re not the only one. What I suggest to you all is the following; grab a medical book from the library, do some Googling (reputable sites only, of course), or even grab a mirror and check yourself out. You’ll probably feel a lot better not turning beet red or bursting out in a fit of laughter the next time you have to talk about something personal.