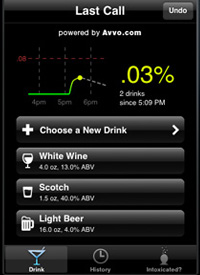 Do you know about the iPhone app “Last Call”? It’s meant to warn people when they should stop drinking if they’re planning on driving. The way it works is as follows: you’re supposed to track your drinks on the app, and as you add the drinks, the curve on the graph changes and tells you what your blood alcohol concentration (BAC) level is at the time and what it will be in a couple of hours.

You probably know that you shouldn’t drink and drive, and that if you do you can suffer serious consequences. Those that get caught get charged with driving under the influence. If you’re underage (meaning under 21 in the US), there’s a zero tolerance policy. This means that your BAC should be below .02. If you’re over 21, your BAC has to be below .08. This app lets you see how close your BAC is to .08, so you that don’t end up driving under the influence.

“Last Call” may seem useful at first glance, but there are many problems with it. First of all, you only have to be 17 to download the app. Why 17? Drinking isn’t legal until in the US until age 21, so shouldn’t you technically have to be 21 to download the app? Another thing wrong with the app is that there’s are only certain drinks you can enter. What happens if the alcoholic beverage you’re drinking isn’t listed? You might be able to pick a similar drink and get a pretty good estimate, but it won’t be exact. Lastly, I highly doubt that when you’re out socializing you’ll remember to track your drinks. I mean, you might do it the first time, but it’s likely that you’ll forget to keep tracking.

Ideally it sounds good, but I don’t think that someone who’s out drinking with their friends will take their phone out every so often just to log in a drink. I think that the only thing effective about this app is that there is an “intoxicated” tab, which allows you to find a taxi if you’re too drunk to drive. Otherwise, I think that this app doesn’t do much more than help underage teens beat the system so that they can drink and drive without getting caught. I also think that it might even encourage people to drink more than they intended. For example, lets say someone just wanted one drink, but looked at the app and then realized that they could have three without getting in trouble. They might very well drink more than they originally intended.

The bottom line here is that if you want to drink, don’t drive – it’s that simple! You don’t need an app to tell you that.