Bullying: Are Bystanders More Important than We Think? 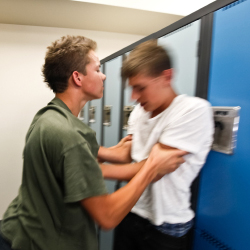 Most teens in Massachusetts have gotten a lesson or workshop on bullying since an anti-bullying legislature was passed due to the suicide case of Phoebe Prince, a young teenager from South Hadley, Massachusetts. Today in my English class we were reading an article called “The Secret to Stopping a Bully” written by Neil Swidey, and I had to share my thoughts about it.

The author talks about how society views bullying on TV, the affects of bullying through social media, and the various attempts and programs formed to prevent bullying. Swidey raises questions about the unrealistic situations of bullying seen in kids TV programs in which the good girl/boy wins in the end – because no real life bully has an epiphany and becomes a saint. Swidey also writes about tactics taught in some workshops and explains the discouraging statistics, emphasizing that many of these programs have no affect on bullying, thus he proposes that we take action in a different way. Swidey suggests that the approach should focus on the role of bystanders and the positive affect they could make in a bullying scenario. Reading the article helped me appreciate a different perspective on bullying and ways to prevent it, so I thought I would share a portion of his article:

“Take, for example, the bullying materials the Massachusetts Medical Society puts out for parents… Teach your child how to help without getting hurt, the materials advise. Your child might say, ‘Cool it! This isn’t going to solve anything. Really, can you imagine any better guarantee for turning a bystander into a victim than by encouraging him to yell “Cool it!” to a bully in a crowded corridor? And when was that last time you even heard that phrase come out of the mouth of someone under the age of 34? More realistic and practical advice might simply be to get the bystanders to walk away, denying the bully an audience without drawing a target on their backs.” – “The Secret to Stopping a Bully”, by Neil Swidey.

The article explains that bullies feed off of the attention that’s given by bystanders more than anything. I agree with the author in that the spotlight should also be on the bystander’s role, because it’s not only about the victim and the bully. People tend to forget that. I bet that plenty of kids have wanted to stand up for what’s right but are afraid of being victimized. Just think, if no one paid attention to the bully, then what’s left to light the fire? What would happen if everyone walked away? Bullies are insecure and feel the need for attention and power. What if more and more people stopped cheering and laughing at the victim and just walked away? Others just might follow, and then little by little people would soon stand next to the victim without feeling nervous or scared about being on their own…because nobody likes to feel alone. I hope that those bystanders hiding in the crowd can see that it can be realistic to stand up to a bully, not only for the victim but doing it for themselves and others. It’s time for voices to be heard.

I suggest reading the article. It might leave you thinking differently about bullying, like it did for me.